I am sure you are willing to jump to the section you are interested in and for this reason, I prepared for you a few shortcuts. Let’s go

Khao Sok National Park (Thai: เขาสก) is in Surat Thani Province, Thailand. Its area is 739 km², and it includes the 165 square kilometers Cheow Lan Lake contained by the Ratchaprapha Dam.

I don’t want to be too rude, but let me tell you from the first instance that this lake is artificial. It has been created blocking off the Klong Saeng River by a dam, which nowadays provides electricity for the south of Thailand.

There were several species of animals that had to be resettled to save them from drowning as the lake slowly filled over a period of 3 years. Unfortunately, a study from 1995 revealed the loss of some 52 species of fish from the river which could not survive in the stagnant water.

As you can imagine there are plenty of reasons to decide to come here and I will show you some telling you my personal experience, short as much intense through these lands.

A day on the way from Koh Tao

There are several ways to reach the Khao Sok National Park, surely the cheapest and most flexible is the minivan. My trip is started from Koh Tao and it took more than 9 hours and several changes to arrive at National Park. The price, 900 BAHT, is fairly cheap considering the ferry and how all these transportations were well connected. I highly suggest you plan your route using 12GO.Asia, which displays all the options available and you can book in advance without risk full booking, especially for the ferries.

Arrived in Khao Sok, I have been kindly picked up by the owner of the Khai Jungle Experience. 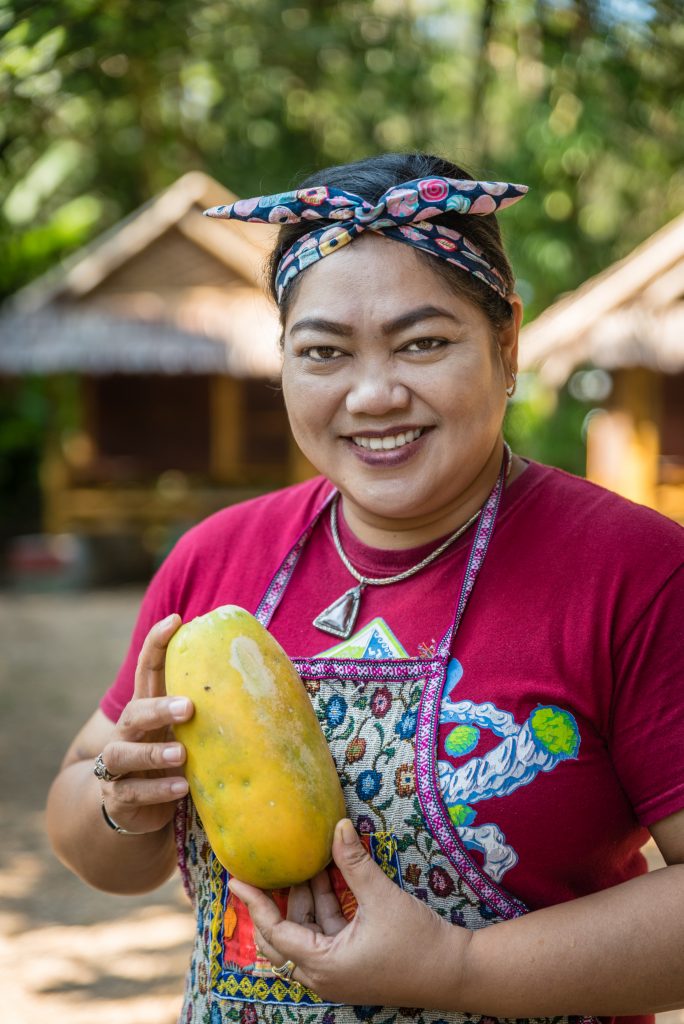 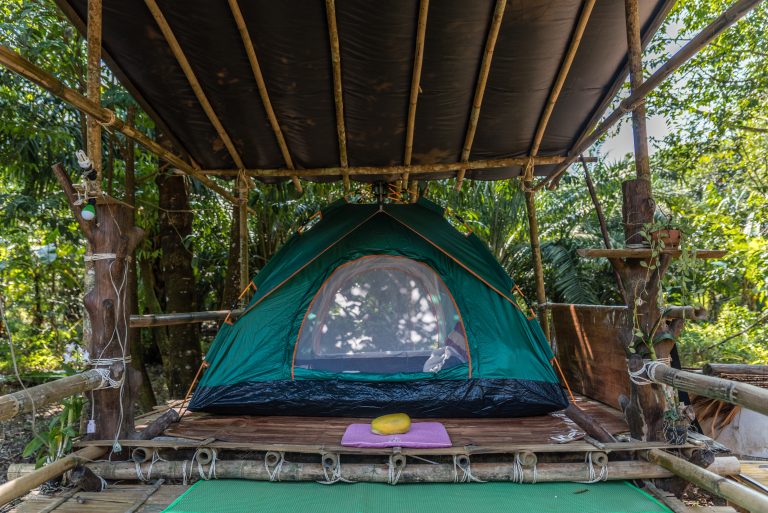 I want to spend some words more for this place, despite I spent here only one night in a tent. The kindness of the hosting family is impressive, picking me up in the night, preparing an amazingly tasty breakfast and finally giving me as a gift juicy papaya, really touched my heart.

The tent (300 Baht/night) reflects properly the “Jungle Experience” I was expecting, there are even other accommodation options and I highly recommend you to have a look at their booking page, if you are searching for a cheap place where to stay.

Here we are to the core of my adventure. I was in touch with Bodhi, the proprietor of Khao Sok Riverside Cottages and manager of several local activities in the area, he focuses on the development of the community, fostering initiatives in the schools and among local farmers and founding his projects interesting, naturally, I agreed to document what’s going there.

DAY 1: The Cottages and Bike Tour

Immediately as I arrived at Khao Sok Riverside Cottage I was really impressed by the beauty of this place and I understood that it would have been a great stay. The resort is composed of charming Thai style wooden bungalows surrounded by a suggestive tropical jungle scenery and naturally by the river from which it takes the name.

The resort is a place perfect not only as a home base to start several activities in its surroundings, but also to find inner peace and reconnect with nature.

Accommodation is truly beautiful, rooms are made with natural materials, beds are comfortable and the view from the windows makes you feel like you are in the heart of the rainforest.

Soon after our arrival, we took part in a bike tour with a really nice girl from the resort’s staff who with patience and care guided us through the Khao Sok village. The first place we visited was the local school. Within one minute we were surrounded by smiling and excited children who immediately started to play with us happy to interact with foreigners. 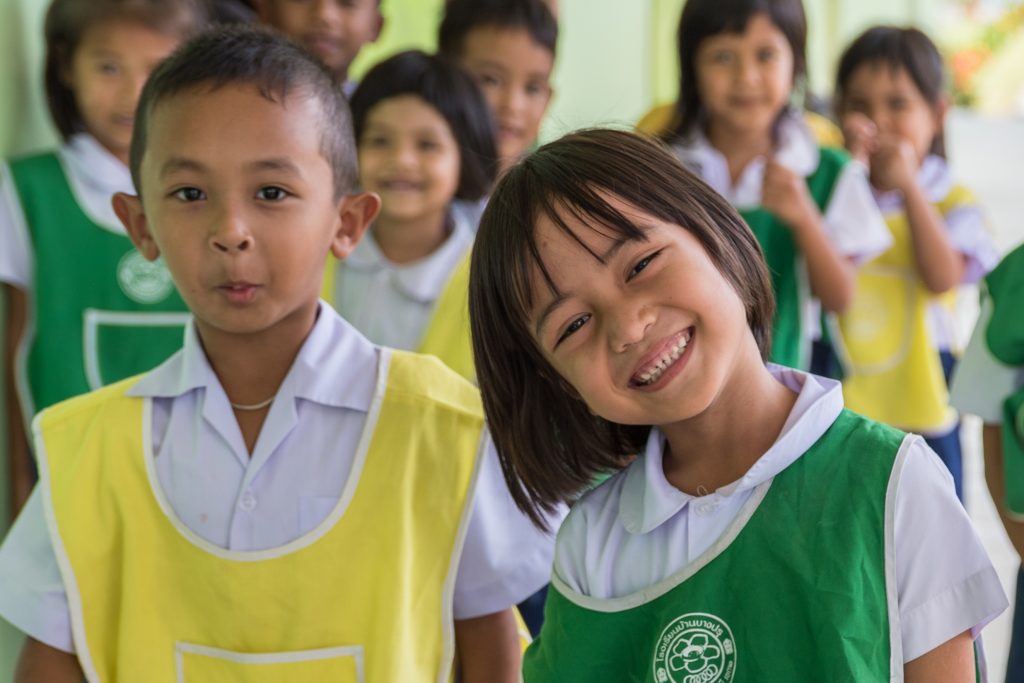 After this big dose of happiness, we get on our bikes and took some crazy routes with the beautiful scenery of mountains, hills and rubber trees orchards to reach a little family-run organic farm, where we could see pigs, chickens, and native plants. 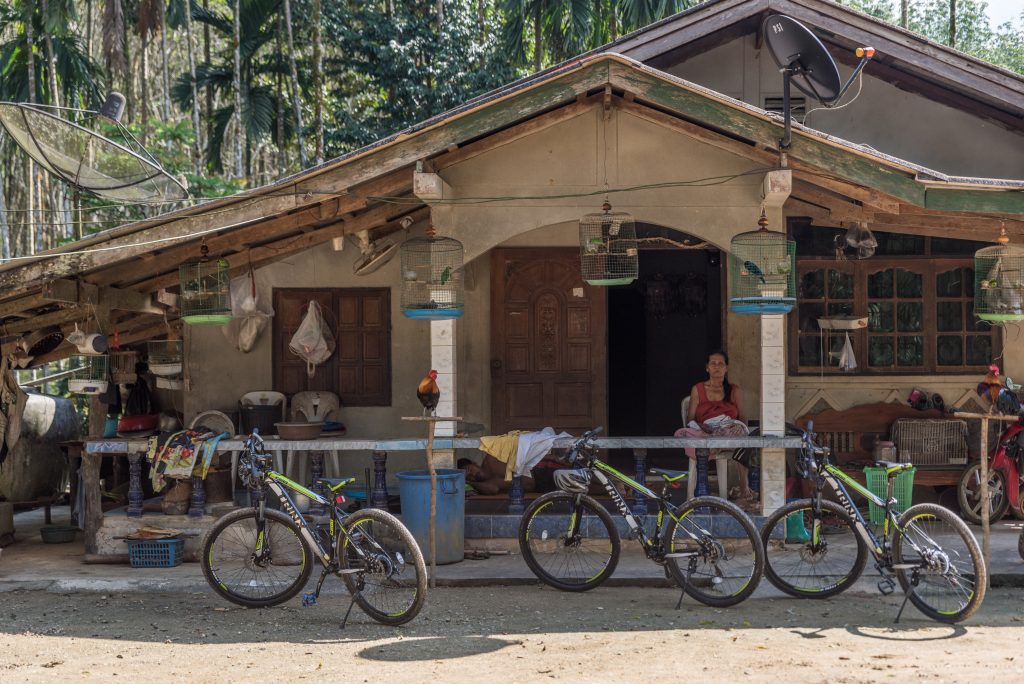 It was a very hot day, so what’s better than a cold drink to recover the energies? Said and done! Stop at Khao Sok Homestay and mushrooms farm where we had the opportunity to see how this practice works and meet with another local family, which was busy in preparing decorations for the Loi Krathong, an important festival in the occasion of the full moon.

Definitely, an enriching cultural exchange, but our tour wasn’t finished yet! The best part of the excursion was waiting for us at Wat Tham Phanthurat, known as Monkey Temple, which is located next to the mountain where the jungle begins.

If you wondering where to see monkeys in the south of Thailand this is definitely a place to visit. This area is inhabited by those cute animals and aside from visiting the temple itself and a beautiful Buddha cave, the main activity is to interact with the monkeys. There you can see plenty of them jumping on the trees and playing with each other. As you visit Khao Sok make sure you don’t skip this place!

Although the hot weather the bike tour wasn’t tiring at all. The roads are good and the ride is quite easy. Thanks to the local guide we were able to visit both local and touristic places. The tour lasted around 3 hours and we went back to the resort right on time to enjoy delicious lunch, consisted of traditional Thai dishes.

After an active day, there is nothing more relaxing than sitting on the bench on your private terrace. You can grab some interesting books from the “exchange book” (next to reception), a cup of tea or just enjoy the unforgettable jungle concert. Cicadas, monkeys, frogs, and birds will provide you with amazing forest symphony and you don’t even need to move from your bungalow.

It’s here that the real adventure began. After breakfast, we were picked up from the resort by the tour operator and with a couple of other guests, we started our trip in the minivan toward Cheow Larn lake.

After about one hour of driving, we joined a bigger group and after paying a fee of 300bath/person for the National Park entrance, we moved to the boat in order to embark on the stunning trip in this real Thai paradise.

In total, we were a group of 20 people, 10 per boat. The wooden speedboats were big, comfortable and safe, allowing us to fully enjoy the stunning and unforgettable scenery of the lake. We had a truly amazing local guide, since the first moment we met him we already know that our trip would have been a full and real experience. Our guide asked us to call him “big men” and for all 2 days of the trip, he supplied us with his support, knowledge and a great sense of humor.

There are not enough words to describe the beauty of the place. Khao Sok National Park is a masterpiece of the Earth.

During the boat trip on the Cheow Larn, we were able to admire beautiful landscapes and I can confirm that the lake remains one of the best places in southern Thailand to see wildlife and pristine rain forest.

After approximately one hour of the boat trip, we arrived at our accommodation. We were provided with a basic room in a really cool floating bungalow. The best of this accommodation is that with just a few steps outside, we could enjoy swimming in the warm lake or grab the kayak and discover the beauty of nature around for our own. 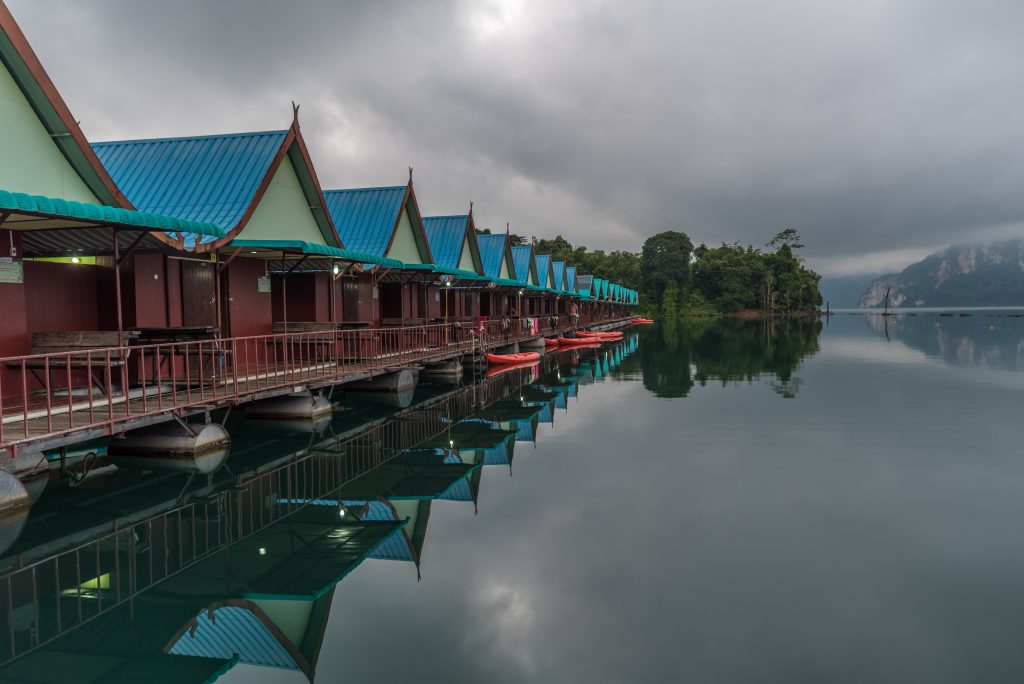 After lunch, we jumped in the boat again going toward the jungle trail to start another activity. Trekking into the jungle!

After a few steps toward the bushes, we knew that it would have been an interesting experience and also that we wouldn’t have to care about the condition of our shoes anymore. Ankle-high mud and knee-high water accompanied us constantly.  The trekking was sometimes quite challenging but there was no single moment of regrets. Surrounded by wild nature we felt more vulnerable and connected to the planet. Trekking in the rain forest among rampant green, rivers and little waterfalls, along with exploring a cave was an experience worthy itself.

Quite tired and dirty, we came back with the group to our floating accommodation where we could enjoy dinner and lake activities. After an amazing and really active day, we fall asleep early in order to charge our batteries for the next day.

DAY 3: Waking up with the Sunrise

The next day we woke up really early, our group met at 6:30 ready to get on the boat, in order to “catch” the sunrise. We spent one hour on the boat, having a chance to see how nature wakes up to life in Khao Sok National Park. During that time we were able to see three different kinds of monkeys in their natural environment.

After breakfast and a short break, we started the last part of our lake trip. We checked out from the floating resort and started the last boat trip to discover a natural cave, where we could admire natural rocks and stalactites that remained untouched by humans.

Like all beautiful things, our trip had to finish. Our guide took us back to the pier where we had to say goodbye to the Cheow Larn Lake.

Thanks again to the Khao Sok Riverside Cottages for the collaboration and the impeccable organization of these tours. If you like what I showed you, I remind you one time more to check their official website to have a look at other packages or book a reservation through my affiliate link, which helps me to sustain this blog and offer you other free professional contents!

This article wouldn’t be possible without the help of my girlfriend Weronika, a unique TravelMate, and writer!

Shoot photos, no bullets ☮️ but handle your sm

Sometime the inspiration comes to you when you les

Is it possible to feel free without some wildness?

A great landscape photo depends by a lot of factor

The eyes pointing to Narikala, the fortress on the

Expressing our personality can manifest in differe

Pripyat and the whole Chernobyl Exclusion Zone are

We use cookies on our website to give you the most relevant experience by remembering your preferences and repeat visits. By clicking “Accept”, you consent to the use of ALL the cookies.
Cookie settingsACCEPT
Manage consent

This website uses cookies to improve your experience while you navigate through the website. Out of these, the cookies that are categorized as necessary are stored on your browser as they are essential for the working of basic functionalities of the website. We also use third-party cookies that help us analyze and understand how you use this website. These cookies will be stored in your browser only with your consent. You also have the option to opt-out of these cookies. But opting out of some of these cookies may affect your browsing experience.
Necessary Always Enabled

Any cookies that may not be particularly necessary for the website to function and is used specifically to collect user personal data via analytics, ads, other embedded contents are termed as non-necessary cookies. It is mandatory to procure user consent prior to running these cookies on your website.